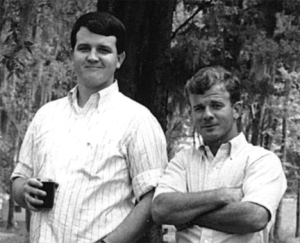 We were in our camping phase. Roughly translated that means we used camping to get out from under the supervision of our parents to do stupid things—mostly at night. To our parents, it seemed innocent and wholesome enough. “They went camping. Isn’t that nice?”

Camping meant: Fire! Meat! Um! Good! Sleeping under the stars! You know, that whole primeval thing boys are so into?

It began innocent enough as “camping” in the Manard’s key lot, then came the Boy Scouts, but our Scout leaders weren’t all that much into “roughing it.” The fact that they had been “roughing it” in WWII only a few years before may have had something to do with their lack of interest in pup tents and sleeping bags. They much preferred the cabins at Camp Salmon or the Small Group Camp at Fontainebleau, which had real beds and mattresses.

We liked to cook over open fires, too. My favorite meal as a kid was foil stew. Who knows what that is? Chunks of meat (insert simian-like grunt here), potatoes, and carrots in a pocket made from tin foil (OK, aluminum foil!). Add some seasoning and a dash of water (beer when we got older) and throw that puppy on a bed of glowing coals, toss some more coals on top, and wait 20 minutes or so. Just slice it open and dig in. GOOD!

As we grew older and could drive and even had automobiles, we pushed the camping envelope. Once we pushed it all the way to Cat Island, but we needed the assistance of a boat to complete the trip.

Cat Island is a small island about seven miles off the coast of Gulfport. It seemed like a great place to camp, and it was. But you needed a boat to get there. My dad had one, so we borrowed it. I still can’t believe he actually let us use it. It was a small speed skiff with the brand name of “Yellow Jacket,” and it was fast with a 35hp Evenrude on the back. By then MB had graduated to his 20-foot custom built fishing boat. The little 14 foot Yellow Jacket was left mostly unused.

We were about to finish it off.

There were four of us: Dee White, Bob Hansen, Buck Roy, and moi. Problem was we couldn’t carry all four of us with our camping gear out to Cat Island in one trip. So, we did two trips. I dropped off Dee and Bob and returned to Gulfport to pick up Buck and most of the gear.

Things went well, until we discovered Cat Island was heavily populated with horse flies—the kind that hurt when they bite. Big fires and mosquito nets kept them under control most of the time. We swam and fished and cooked over open fires and had boy-type camping fun on our own little deserted island. We went to sleep that first night to the sound of a crackling fire and campfire tales. It was heaven!

We woke up the next morning to discover the Yellow Jacket was gone. We were marooned!

We found it later that morning way down at the other end of the island. The winds and tide had carried it down there dragging the anchor the whole way. Whew!

Unfortunately, it had suffered some damage on some concrete something-or-the-other along the beach, but we did not realize this at the time. We pulled it up on the beach well above the high tide mark to make sure it remained safe.

My dad showed up the next day in his new boat to check on us, having come all the way from Waveland. That was convenient, because we were about to leave. So, he took Dee and Bob and most of our gear in his bigger boat and left Buck and me to take the Yellow Jacket back to Gulfport where my car waited.

MB left, and Buck and I finished packing the Yellow Jacket, getting a late start near sunset. We are cruising full speed for Gulfport and were about half a mile from Cat Island when Buck taps me on the shoulder. Over the roar of the Evenrude, he yells, “We have a problem!”

“What kind of problem?”

He points at the back of the boat, and I see lots of water where it should not be—inside the boat!

And he did. I had the throttle wide open, and Buck was bailing as fast as he can. The outflow was just barely keeping up with the inflow. It is dark by then, and don’t you know we come upon a big shrimp boat pulling his trawls. I can’t run in front of him for fear he will run us over, and going behind risks getting fouled in the lines or his nets—and sinking for sure—and maybe getting shot! Behind is the only option, so I swing wide, and Buck bails faster still.

We got it around it without fouling the prop, but there was lots of vigorous hand waving and yelling issuing forth from the shrimp boat’s crew during the maneuver. We did make it to Gulfport and got the boat on the trailer before it sank. My ’57 Chevy struggled to pull that water filled skiff up the ramp. It probably did not stop draining until we were nearly to our house in Waveland.

The cement whatever had punched a hole in the bottom right at the transom. Turns out that was a place that held water even with the drains open, and the wood was rotten there. We gave up on camping on islands after that.

Tagged as Kenner, Martial B. Casteix

4 responses to “That Sinking Feeling”