I had a brief discussion with Elton Lagasse, Manard’s older brother, at a meeting the other night, and he reminded me of a story from our childhood. Manard had a needlephobia, a really bad needlephobia. I never really considered Manard to be a coward. He was always there with the rest of us, doing all the stupid and risky things boys did back then, but he really feared getting shots. (Manard is in the middle in the image on the right.)

As mentioned elsewhere in this blog, my dad, Dr. M.B. Casteix, used to periodically round up all the kids of our extended family for inoculations for just about every disease known to man. Those were followed in a few weeks, or a few years, maybe both, with booster shots. And then there were the tetanus shots for our frequent wounds and rusty nail punctures in our bare feet, and we were always barefoot during the summer. Seemed like we were always getting shots for something when we were kids.

The call would go out, and all us kids would be required to report for inoculations, usually on Saturday afternoon or at night after the my dad’s office closed. The roundup included Manard and Elton Lagasse, Bobby and Melanie Manard, Kibby Manard, and sometimes even my cousins, Stephanie and Robin, and sisters, Jeanne and Martia, who were all quite a bit younger than the first mentioned group.

All of us had “side-entrance privileges,” which means we could go in the side door of the office. Usually escorted by parents, we marched into the last examining room at the side entrance end of the hall and lined up for our shots. On one of the first such inoculation roundups, Manard managed to be at the head of the line, and he was looking a bit nervous—maybe a lot nervous? 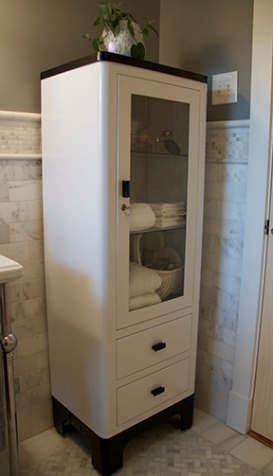 MB went to his instrument cabinet (which now resides in my bathroom) for a syringe. Whatever it was he came out with, Manard evidently thought it resembled something on the order of a turkey baster with a big needle, because his eyes got got as big as saucers, and after only a brief moment of indecision, he concluded he wanted no part of that thing and promptly decamped.

Panic stricken, he headed out the examining room for the side door, but Henry Lagasse, his dad, waiting there for him to take him home, happened to be blocking his way. Upon seeing his dad standing there with a questioning expression on his face, Manard did an about face and headed up the hall that ran the length of my dad’s office, but that offered no means of escape; the front doors were locked. Henry knew something was up and was in hot pursuit of his youngest child. He caught up to Manard in the little room at the end of the hall where the bathroom and coke machine were (Heath has that over in Texas, the coke machine, that is).

Somehow, Manard got past his dad, bolted out of the coke room, failed to navigate the turn and bounced off the hall wall, then headed back down the hall at a full-tilt run for the side door—and needle freedom! About then MB innocently stepped out of the examining room with the syringe in his hand to see what was up with Manard. As soon as Manard got a  look at “Dr. Frankenstein” with his turkey baster hypodermic, he slid to a halt, his Keds making little screeching sounds on the highly-waxed, asphalt tile floor. He did another about face only to run smack into his dad, who was still in hot pursuit but obviously gaining on him.

Henry manhandled the loudly protesting and squirming Manard into the torture chamber—er, I mean examining room—for his dose of whatever it was we were getting that day. MB stuck Manard, and he squealed like a stuck pig.

The rest of us kids stood around kind of big-eyed and slack-jawed in complete awe of what had just transpired. Most of us were thinking maybe we should be considering some kind of escape plan ourselves? But the door was by then well covered by at least two parents, and seeing no way out, we reluctantly got our shots with only minimal whimpering. They stung a little, but we lived.

The whole affair became a source of humor for all of us but Manard, of course. All future inoculation summons were somewhat looked forward to, because we wanted to see what Manard would do, and he never failed to impress us with his fear of the needle.

The last photo is of Kibby (on left) and Manard with my dad’s office behind them. Thanks to cuz Bobby.