Anyway, I started this sketchbook when I was in technical school to learn to be a weather observer. The school was at Chanute AFB in Rantoul, Illinois, which is not far from Champagne Urbana and a goodly train ride south of Chicago. Now that you know exactly where Chanute was (because it is closed now) on with the story. My plan was to keep a record of my Air Force experience in the form of sketches. Unfortunately, I stopped sketching in my sketchbook not long after arriving at my first duty station, which was George AFB in California. I wish I had stayed with it. The images that follow are from that sketchbook with a few clarifying comments. Enjoy!

I arrived at Chanute in Late January of 1969, and for the seasonally challenged, that is winter, and for you southerners, it is colder than a witches tit up north in winter. Thus most of the images show airmen in winter coats. We were met by a Red Rope. These are one striper students like I was but had volunteered for leadership positions in the student squadron. We had Green Ropes, Yellow Ropes, and Red Ropes in ascending order. They tend to over-assert their authority and the one who met us in the middle of a January night after lights-out emphasized he would tolerate no insubordination from us “pings.” Ping is the sound of the tiny sprouts of hair popping out of our basic training shaved heads and what we airmen fresh out of basic training were called. 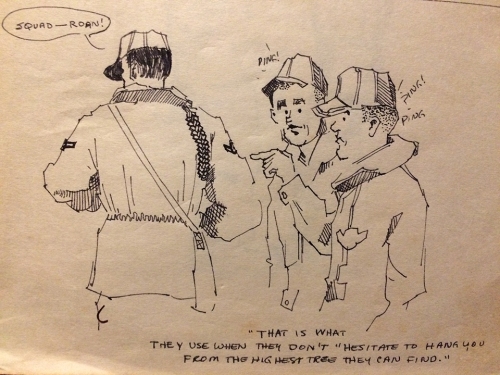 We had to march in formation to class and back every day, and they had a code system that told us what we could put on by way of uniform parts. Code C did not allow rubber overboots.

Ken Epperson of Ottumwa, Iowa became my best friend in tech school. Ken was a bit of a rebel and refused to lower himself to march to class in the squadron formation. He “straggled” to class and back every day and never got caught. Ken was also not the tidiest of airmen and was a bit unkempt, thus this drawing of Ken.

We had to march past a B-36 bomber on static display. That thing is huge! It was populated by a whole bunch of pigeons, and dead pigeon carcasses could be seen on the inside behind the plexi nose. I had some fun with it in a couple of sketches. 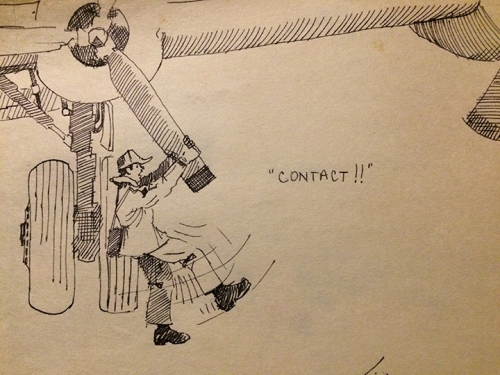 As I said it was cold. The airmen in fire control school were also in our squadron, and since they spent so much time outside, they were issued arctic parkas. The rest of us had to get by with cotton field jackets with an insulated liner. You could really disappear inside those arctic parkas. They issued one to me in California and again in Alaska. I loved it and considered claiming it had been stolen so I could keep it. But then what would I do with it in Louisiana? 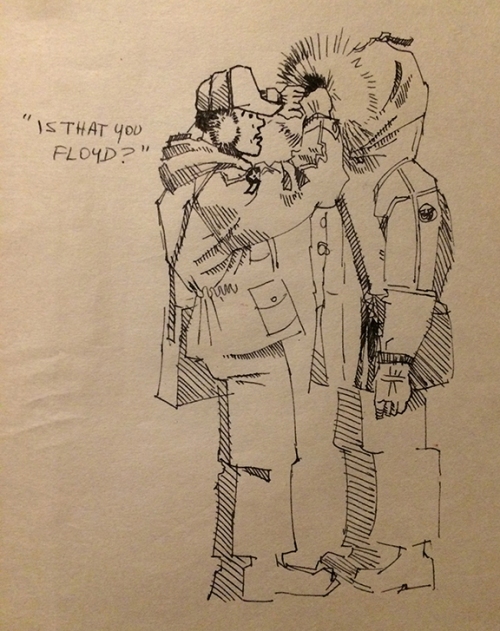 Nightly hallway hockey games kept us entertained before lights out. A rolled up sock served as a puck and a broom our hockey stick. The uniform was whatever you had on, which usually wasn’t much. They could get quite rowdy.

All of us had to pull two-hour dorm guard shifts, including all through the night. I got out of losing my beauty rest because I was tall enough that I was the second man in the first squad (left column) in our formations and pulled road guard. Road guards run out ahead of the formation and block vehicular traffic at intersections. Our weapon for stopping disobedient second lieutenants in their Mustangs was a flashlight with an orange tube on the end. We would stand there in the middle of the road at parade rest with our flashlights extended down from our outstretched right hand waving it back and forth like a pendulum, daring them to run over us. I got out of dorm guard duties because of that but got quite a bit of exercise. Dorm guards got a little relaxed on weekends.

Eventually, all these fun-an-games came to an end when we finished tech school and got orders for our first duty station.

We had passes that got us off base on the weekends. The four of us who hung together usually hitched a ride to Champaign to a pub called the Red Lion. I wonder if it is still there? I just checked and it is!  This sketch is our last night at the Red Lion before we shipped out for PCS leave after graduating from tech school. We were kind of sad to be breaking up the gang. 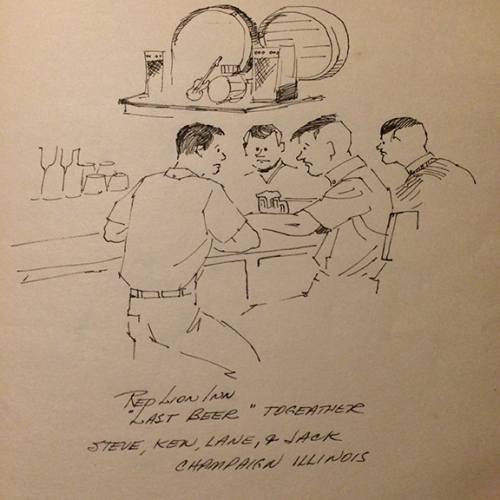 We left Chanute in a rented car headed for O’Hare Airport in Chicago with fond memories of our time there. (Snork!)

Home at last! I left New Orleans for Lackland AFB basic training on Dec 3, 1968 and arrived back in NOLA in June of 1969.