It’s that time of the year when our thoughts turn to nut-crackin’, and I mean the kind you eat not the stage play, although that is also part of the season. This is nut season when we have an abundance of fall-harvest nuts to choose from—and I LOVE nuts, raw or roasted. My favorites are pecans, but walnuts, Brazil nuts, and almonds, especially roasted almonds make my eating list. With the advent of nut season, outcomes an array of instruments designed to get at those delicacies inside their nutshells. I am going to review three such nutcrackers, three only because that is what I use and cherish, as you will see. 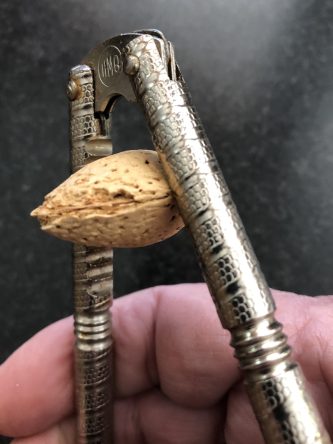 The first is the common nutcracker composed of two shafts double hinged at one end. The nut goes between the shafts and squeeze—simple. We have all used them or one very like this one in the pic. They are very effective for their intended purposes, as testified by their still being around and in use long after they were invented. (I have no idea when that was, except it was a very long time ago before I was born.) Down heah in sout’ Loos-e-anna, they serve double duty during the summers to get at the meat inside blue crab claws. You’ll know whut ah meen, cher? Mine were inherited from some long-dead relative but still serve just fine.

The second in my nut-crackin’ arsenal is a bit unusual. Janis and I picked this one up in the HEB grocery in Abilene, TX about 15 years ago. It resembles some kind of mid-evil torture device for nipping off the tips of fingers of people you don’t like. They are quite effective on certain kinds of nuts, especially pecans. So much so, I am betting they were invented for that specific nut. Since it didn’t come with instructions, I had to experiment to learn how to most effectively use it for opening pecans. I discovered it works best if you nip off the two ends of the pecan as seen in the pic above. 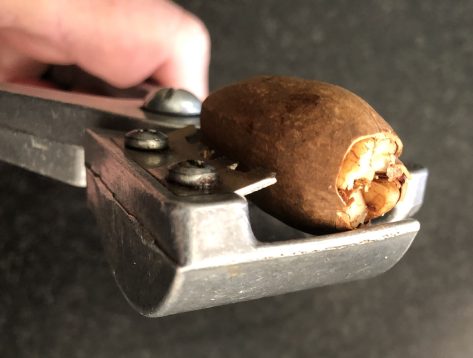 After that, you locate the two halves inside the shell and use the fingertip nipping blades to split the pecan along the two halves. 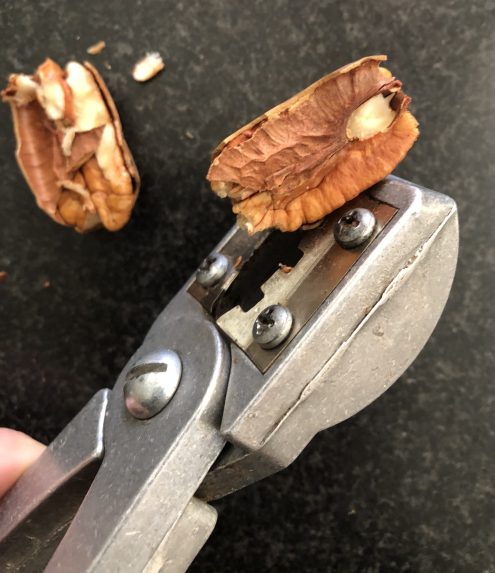 Once the nut is split in two, all you need do then is nip away the shells from the meat until the half comes out usually whole. It beats every other form of pecan-opening device I have encountered short of a scissors zipping open a bag of already shelled pecans. 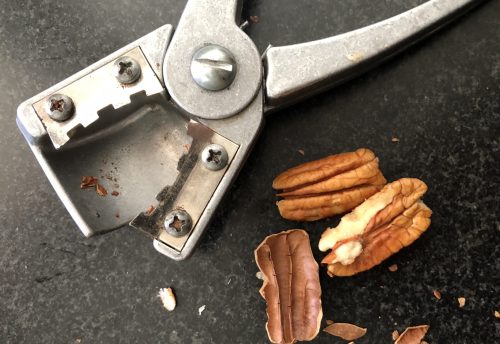 I have never seen these for sale anywhere since, but a search on Amazon turned up one called the Texan Nut Sheller. Looking for a good pecan cracker? This is it. 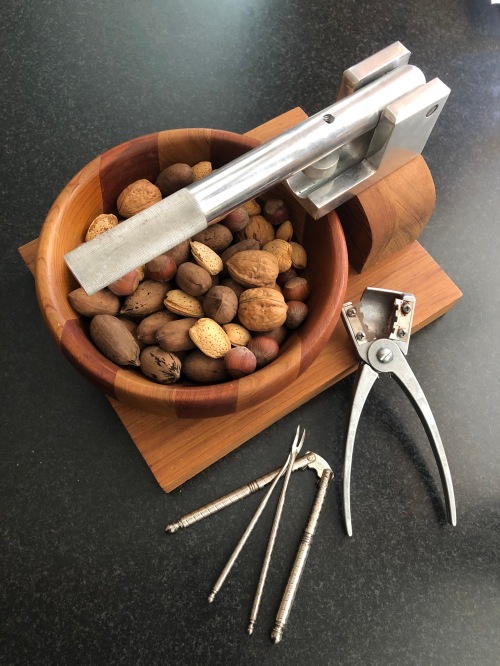 The last one in my arsenal of nutcrackers is very special to Janis and me because it was a Christmas gift to us from our two sons some 20 years ago. Elder son Heath was serving in the Air Force then and had just completed his tech school at Aberdeen Proving Grounds where he was learning to repair battle damage on aircraft. Part of his training was learning machining, and he machined the metal parts of this nutcracker out of aircraft aluminum. He brought that home for Christmas leave and turned it over to his younger brother Ryan. Ryan was into woodworking, and he made all the wooden parts—its base and bowl. The base is made of cypress, and the bowl was turned on a lathe out of cypress and mahogany blocks glued together. The mahogany came from his grandfather who had salvaged it from a mill in Harahan, LA some 50+ years before. 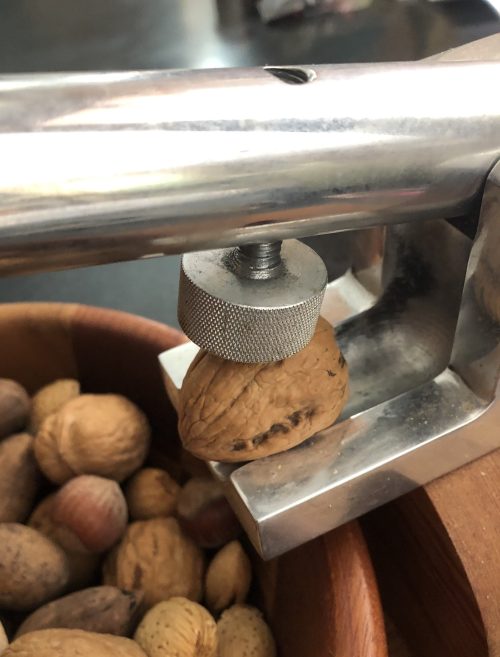 The cracking “hammer” part is threaded into the handle and is thus adjustable. The nut is cradled in a machined groove in the base and the “hammer” breaks it open. It is very effective on a variety of nuts but especially so on walnuts. For obvious reasons, this one is very special!

There you have it. Go out and buy a bunch of nuts and get after them while they are plentiful.

This is Thanksgiving week, as I write this, and time to be thankful for all the great nuts God has left for us. And I mean the kind you eat and the ones we have to learn to live with. As for those, remember we are commanded to love them. Have a great Thanksgiving!

2 responses to “The Nutcracker(s)”