Remember back eight weeks ago I posted about my grandson going off to Air Force Basic Training? It is now eight weeks later and here he is. 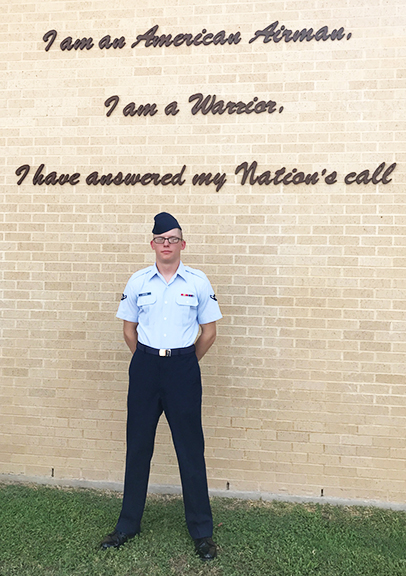 Janis and I drove over to Lackland AFB in San Antonio, Texas, to be there for Blake’s graduation from basic training. It was a grueling trip that was supposed to be about eight hours that turned into more than ten with several periods of stop and go traffic—an hour and a half just to get through Houston! It was an intense and emotion-filled weekend as we joined his parents, his sisters, and some cousins as well as an aunt and another grandmother. Having done my basic training at Lackland back in December 1968-January 1969, I found it particularly moving. This was especially so because Heath, my son and Blake’s father, had also been there a few decades after me, in 1996, when he did his basic training at Lackland. Three generations of Casteix men in the Air Force. The three of us are in the pic below. 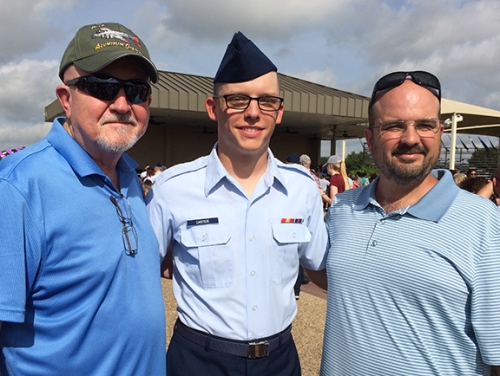 Blake will next be going to NAS Pensacola for training in “Non-Destructive Inspection”. That means he will be inspecting aircraft for structural integrity, and the testing involves non-destructive processes. It is a highly technical field. Interestingly, Heath has his own business doing aircraft airframe repair and then FAA certification of the repaired parts. He learned that trade in the Air Force. Later as a civilian, he took training in what Blake will be doing, and his business is also a FAA certified NDI inspection station which has more business than he can handle. That means Blake will have a job waiting for him when he gets out.

I guess you have figured out by now that we are all very proud of Blake.

A point I would like to make in closing is that “education” need not always mean college, and success and financial security need not require a college degree. Heath makes a lot more money than I did at this point in his life. I am of the opinion that many kids in college today are wasting their money and would be better served by military training or a good trade school. Unfortunately and incorrectly, that sometimes carries a negative stigma for some people.