My dad, Dr. MB Casteix, used to make cherry bounce. His foray into creating adult beverages began when he was quite young. Since he started college two years earlier than most, having skipped two grades, he must have been younger than 16 on his first attempt because he was still living at home with his parents. At that time they were living on Bourbon Street in the building that is now the Famous Door Bar. It was a pharmacy at then, and the family lived above it. I wrote about his cherry bounce escapades here. 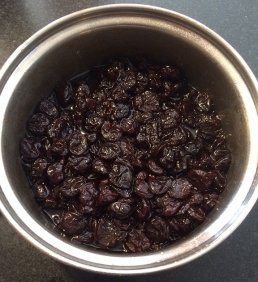 I decided I would like to attempt to recreate MB’s cherry bounce, but I don’t have his recipe and have no idea how he made it. I did a search online and found a few recipes, including one that is attributed to Martha Washington.

I did know one thing about MB’s recipe, and that was that it evidently continued to ferment in the bottle. In that linked post above, there was a recalled incident of the top blowing off the bottle and scaring the hell out of our maid. The recipes I found called for adding bourbon, rye, or brandy to the cooked cherry mash then storing that for three months. The alcohol should prevent any further fermenting, I would think. But I have to go with what I have.

So…I created a modified version of Martha’s recipe in smaller test proportions and cooked up a batch. The attached pic is the cherry mash before adding the rye whiskey. Unfortunately, we will have to wait three months to see if it is any good.