In my book 1943 Road trip! Searching for Miss Betty on a WWII Harley-Davidson, one of my “characters” is a 1943 Harley WLA Liberator military motorcycle that my main character, Mac McConnell, bought and ends up taking on a road trip across much of southwest America in search of Miss Betty. That motorcycle is a central part of the story and the inspiration for the title—that and the fact that the backstory took place in 1943. 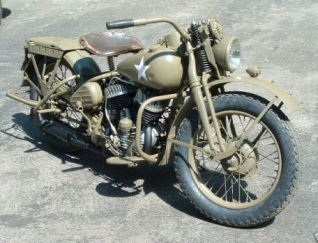 Well, I stumbled upon a video on YouTube of someone taking a ride on a 1943 Harley-Davidson WLA, which is linked here. It is a fun eight-minute video of the owner of the bike taking one last ride before selling it. Evidently, he lives in Great Britain because he is driving on the “wrong side” of the road. If you watch the vid, notice how he has to shift gears, using a hand shifter on the left side of the gas tank. Modern bikes use a much more convenient foot shifter so your hands stay on the handlebars. The siren you hear during the vid is on the bike itself and not some cop trying to pull him over.

I owned a motorcycle for only a few years and began riding at age sixty. For the very brief time I rode with two close friends, I really enjoyed it and wished I had started much younger. As Mac says in the book, which was a quote from my friend and fellow rider, Buck Roy, “Riding is the closest you can get to flying and still be on the ground.” I really miss those lazy trips up and down the winding River Road along the Mississippi River. Watching this vid brought back those memories.

As bikers are fond of saying, “It’s the ride, not the destination.”