As we pick up the action in my dad’s wartime diary and picture album, we left our intrepid hero at Caserta, Italy with the 5thArmy on the road to Rome. They will soon encounter stiff resistance to that trip, a mountain top monastery called Monte Cassino.

On 26 January they moved up to Mignano with the 10thField (Hospital). Mignano is just southeast of Cassino. He mentions a “new landing at Netturno,” but there was no Netturno that I can find. There was a landing at Anzio in February 1944, and this may be what he is referring to if we assume he is not still in the 26 January entry. He mentions that the 95thEvacuation Hospital was bombed by the Germans. So much for honoring the red cross.

Another break from the war– “June Clyde, Louise Allbritton, Harry Barris give show & have lunch with us. Movie stars pooie (SIC)!” I guess he wasn’t impressed? I Googled them, and both women were real lookers, especially Louise. Evidently, looks aren’t everything…

The next entry says they got some R&R at Sorrento, which is down near Naples. He seems to focus on the hot water baths he got there and “modern bars” and a visit to Capri. They rode the Funiculare (Funicular), which is a cable car system used in mountains.

Another visit by a movie star, John Garfield. This one impressed him more. “Good show!”

Back to the war – “Squalor in most Italian villages: no sanitation & waste thrown in street. No one seems to have ambition to improve himself.”

I am noticing MB having a series of mood swings. Sometimes he speaks highly of Italy and its people and other times not. He has been overseas for almost two years at this point, and I am suspecting the war is wearing on him. I imagine he has seen his share of blood and gore by now with more to come. The USO shows seemed to help, but a man has his limits. This becomes more obvious later in his diary.

“15 Apr we move up to Mignano to support the 194th F. A. Gr. who are working with 8thArmy. Business should be slow.” This entry is confusing. There was a 194th Field Artillery Battalion in the area at this time. The 8thArmy is British not American. And what does the “Gr.” mean? The 194th was a National Guard unit, but then most units in the Army in WWII were NG. Another mystery… (UPDATE: I think 194th F. A. Gr might be the 194th French Auxiliary Goumiers? The “Goums” get mentioned below.)

He has learned that being a company commander has its drawbacks. “Running a company is a terrible headache: equipment problems, HQ always worrying you, inspections, etc.”

“May 8 – The big push to Rome is due any day now. Shortly after will come the invasion (I hope).” The invasion he is referring to is the Normandy Invasion on 6 June 1944. In a post a few lines down he predicts the date pretty close. Rome was taken about the time the D-Day landings in France took place, which overshadowed the news of the capture of Rome.

We have another break from the war – “Our British friends at Mignano. Bill Waller and Charlie Walker… The most amusing & generous characters I’ve met!” 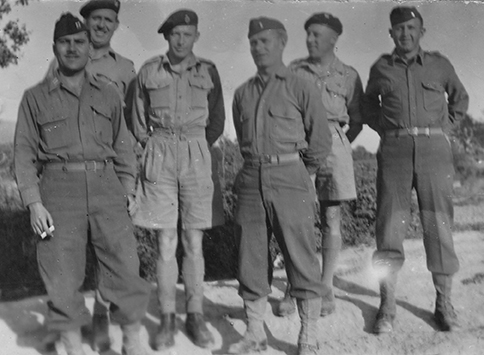 Bill and Charlie in berets?

“An amazing war, this! Here we sit seeing movies right under the noses of the Krauts. We’re 5 ½ miles from the front. Easy gun range!”

“11 May 2300 hrs –This is it!! The big push to Rome and beyond is on. H-hour is at hand! Never has any force of comparable size had the striking power of this one. Firepower is terrific. We hold complete mastery of the air & everyone confident that we will not be stopped.”

And here he predicts the Normandy date, “The big channel show should start in 2-3 weeks from now. It’s the beginning of the end!!!” Using the 11 May date of the entry and adding 3 weeks gets us to 1 June. The invasion took place on 6 June. It was scheduled to be earlier, but weather forced a delay.

“18 May – The push continues. Tough rugged fighting, but we’re pushing ‘em back. Cassino finally fell!!!” It fell only after the Allies bombed it into rubble. The problem was the Germans made better use of the rubble than the buildings there before the bombing.

MB’s company is supporting French units and will be involved in air evacuation of the wounded. They will excel at their jobs and get a commendation from HQ 5th Army as we shall see. 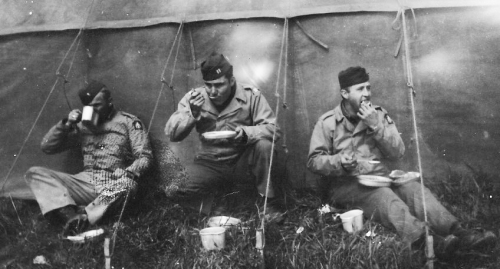 Chow where and when you can.

23 May Continued – “Beachhead begins push.” The Anzio beachhead most likely what he is referring to. Back in February, the Americans attempted a flanking movement and landed a large force at Anzio, which is between Cassino and Rome. The landing force remained bottled up around the town of Anzio until the big push for Rome in May. “It’s all over but the fighting! Watch for another landing above Rome as soon as we join the Anzio boys.”

“31 May – Who says the Luftwaffe is dead? Bet the papers home don’t tell about German air activity here. All I hear over our radio is ‘no enemy planes were seen during the daylight yesterday.’ Yeah, what about nite? We’ve had raids almost every nite since the push started. They cover everything from the front to Naples, dropping bombs indiscriminately & strafing anything. They rarely cause much damage but the nuisance value is great. Seldom more than 20-30 planes.”

“The French are proving the point that they are good soldiers. Given good weapons, they will stack up against any soldier in the world. Their advance has been the most rapid & over some of the toughest terrain. They are holding about ½ of the front. The Goums are wonderful.” 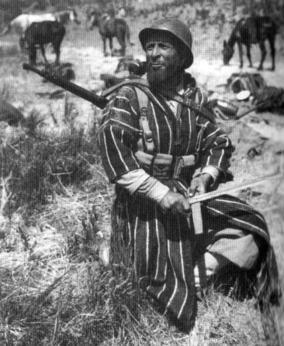 He is referring to the Les Goumiers Marocains. The Moroccan Goumiers were indigenous soldiers who served in auxiliary units attached to the French army. While nominally in the service of the Sultan of Morocco,  they served under French officers. They were feared night fighters and preferred to use knives when possible.

Fifth Army commander Mark Clark had this to say about the Goumes, “In spite of the stiffening enemy resistance, the 2ndMoroccan penetrated the Gustave [sic] Line in less than two day’s fighting. The next 48 hours on the French front were decisive. The knife-wielding Goumiers swarmed over the hills, particularly at night, and General Juin’s entire force showed an aggressiveness hour after hour that the Germans could not withstand. Cerasola, San Giorgio, Mt. D’Oro, Ausonia, and were seized in one of the most brilliant and daring advances of the war in Italy… For this performance, which was to be a key to the success of the entire drive on Rome, I shall always be a grateful admirer of General Juin and his magnificent FEC.”

“4 June – We made it!!! We entered Rome this A.M.! The end of 9 months of bitter, backbreaking, disheartening fighting. We won’t stop here! Now we can think of the INVASION!” The Normandy landings were two days later.

North Africa, Sicily, and Italy were never intended to be a way to enter Germany. It was a compromise with Churchill’s demand to attack the “soft underbelly” of the Axis and drive Italy out of the war. It was also to take some pressure off the Russians on the eastern front who were demanding a second front to help them. It worked. Elsewhere I mentioned an incident when my father-in-law was shot down over Sicily. On his way back to North Africa on an LST, they picked up a German pilot who had been shot down the night before and was floating around in the Med. Bobby, my FIL, made friends with him during the voyage and was told by the German he had been on the eastern front and only recently transferred to Italy.

We will stop here for now. There is more here…